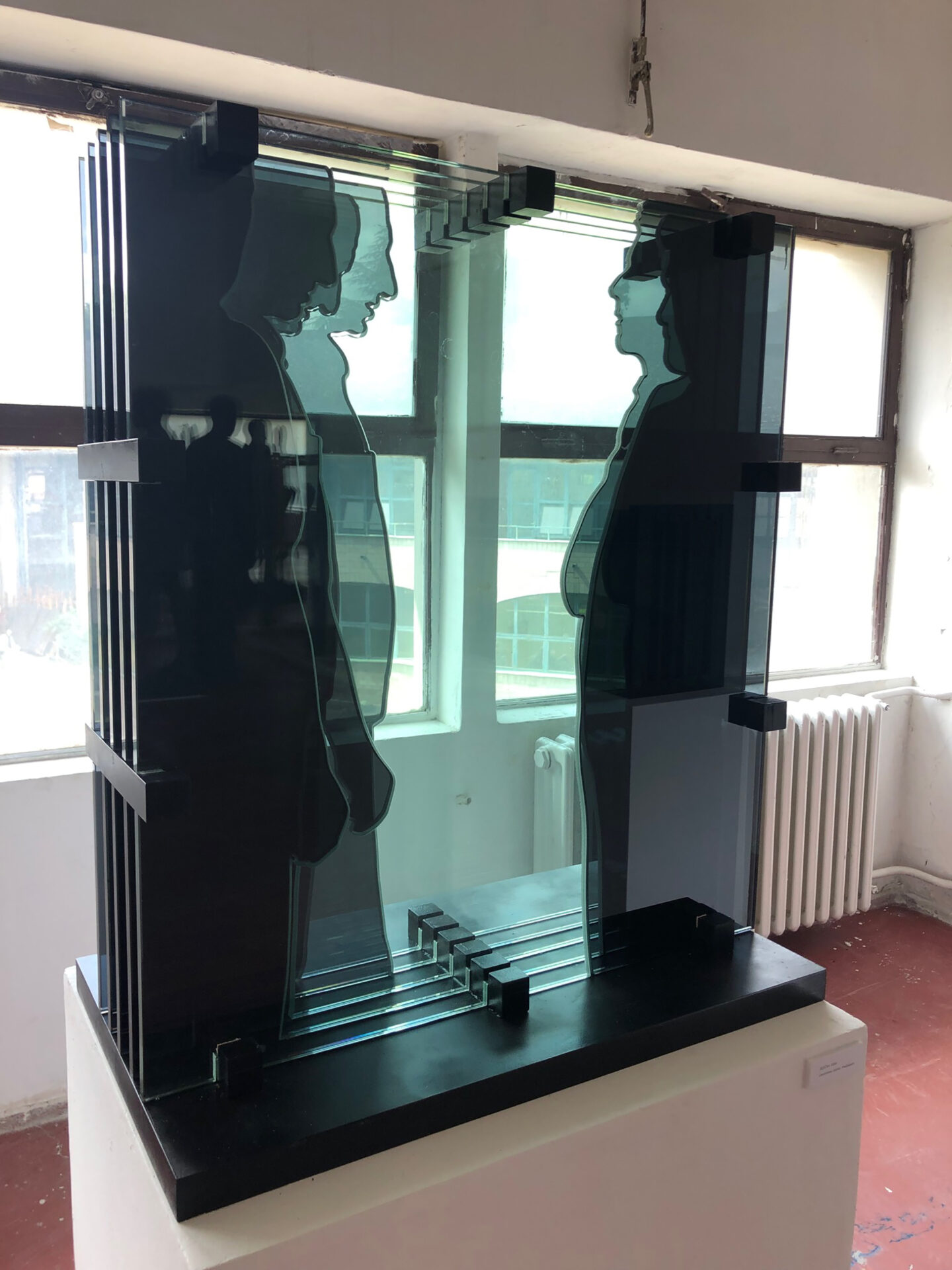 Dunja Trutin is a sculptor and multimedia artist working in Belgrade. She graduated sculpture from Faculty of Fine Arts in Belgrade with a master’s degree in 2015 and is currently enrolled in doctoral studies. Dunja has been working as an art educator for six years. As of 2021 she is employed as a teaching fellow at Faculty of Fine Arts, Sculpting department. She exhibited her work at solo exhibitions five times and participated in several international group exhibitions and projects, such as Between the public and the private in Belgrade, Grisia Youth festival and Transform festival in Croatia and others. From 2014 to 2019, she coordinated workshops and exhibitions Interventions in Cultural Center Magacin, working with an international group of young artists. Her works are part of two collections, Center for Art Education Šumatovačka and Niš Art Foundation. Dunja received several awards for sculptures, video works and installations.

The work is part of a series named Conversation spaces and is focused on the idea that visual, spatial works can function as groups of signs with their own syntax and “rules”, making it possible for the viewer to recognize and read simplified elements and understand a specific meaning, or multiple meanings. In this case, the rhythmic repetition of similar, but varying shapes, “frames” with human profiles is the “rule” for arranging shapes in space. The outlines of figures are an homage to Ludwig Wittgenstein and Bruce Nauman, in this case – an imaginary conversation taking place between two thinkers who shared ideas on meanings, games, tautologies and verbal-visual “utterances”.

Dyadic interactions are basic units of social relations, building the complex structures – not only social, but semantic as well. The human need to signify, to form a symbol and represent concepts of life leads us to creating and overlapping visual forms which simultaneously stand as symbols, as well as indexical signs, allowing us to recognize the traces of actual human interactions. Someone may perceive the visual “sign” of the framed space between silhouettes of two people as a moment frozen in time; but it also functions as a visual “word”, forming sentences and systems with multiple layers of meaning. The space surrounded by two bodies is being recognised by the viewer as something familiar, and yet the importance of it is highlighted by reduction of visual elements, transferred into a solid, spatial form.

The work Language game is based on the universal concept of Conversation space, emphasizing the importance of symbolic communication, the exchange of ideas between philosophy and art. The silhouettes are based on the photos of Bruce Nauman, the famous American artist, and Ludwig Wittgenstein, the founder of analytic philosophy. The two great minds share a number of ideas; Nauman’s works often put verbal and visual “utterances” to the test, performing a kind of “language games”, exploring the concept which was first developed by the famous philosopher.

Ludwig Wittgenstein, in his work Philosophical Investigations, proposes a language game in which specific letters serve as substitutes for colors, and another game with similar rules – he writes: Could we not imagine people who had names for such combinations of color, but not for the individual colors? Similarly, we can propose a game in which we can name dyadic conversations and interactions, instead of individual people. In this language game, we can decide to award a specific, spatial sign to each interaction – thus forming individual Conversation spaces.