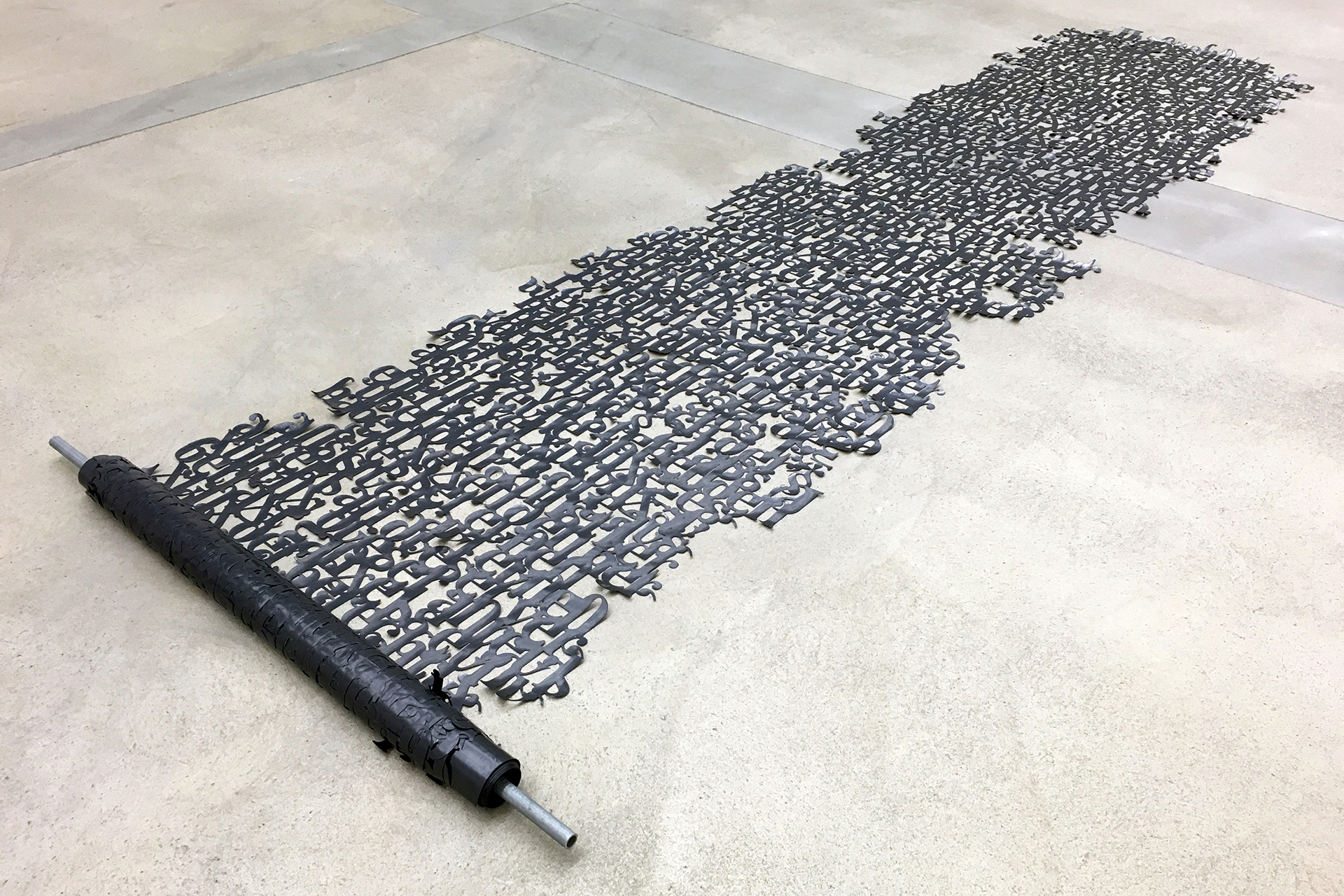 Isabella Kohlhuber’s (*1982, Austria) studied Transmedia Art with Brigitte Kowanz at the University of Applied Arts. Earlier studies include graphic and communications design (BA) and analytic philosophy at the University of Vienna. There she encountered texts, specifically by Ludwig Wittgenstein, that were to be decisive for her future work, which today focusses in particular on the role of writing and the significance of knowledge in the digital age. Her oeuvre includes paintings, sculptures and installations which are explorations of visual forms of language and communication. She transfers language into space and liquefies writing into images in order to experience interaction with meaning. Kohlhuber reflects upon how we see and read pictures and texts and tries to find the difference between these practices. She thus opens up a new way of communication by removing her illegible hybrid letters from their textual coding and placing them in space as three-dimensional objects, consequently detaching them from their original purpose. Her works have been exhibited internationally and were most recently on view at Galleria Doris Ghetta, Bluerider Art Gallery Taipei, and Untitled Projects, Vienna. Numerous installations have been implemented temporarily and permanently in public space

Aus dem Gesetz / [From the Law]

This large text scroll is a materialized interpretation of a juridical text, based on the typeface „Bastards“ developed by the artist Isabella Kohlhuber as a hybrid form between lettering and image.

Taking the form of a scroll, Aus dem Gesetz [From the Law, 2016] is rolled up onto a rod and partially unfurled along the floor. Of course the mother of all legal texts is the holy scroll with the Five Books of Moses; the Jewish tradition in particular is devoted to a diligent interpretation of the Torah. The text scroll employed here has been fashioned from vapor barrier foil as used for insulation purposes in the building industry. The text itself reproduces a clause from Austrian copyright law (§ 76, Section 2 about the protected rights of audio media) and is freely accessible on the Internet. The letters were transferred into the Bastards font and all of the surrounding foil material was removed by laser over the length of about ten meters, leaving in place only the undercut font along narrow lines. The text has the appearance of densified meshwork, abstract like a texture. Around six meters of blank material remains wrapped around the rod. For exhibition purposes, the foil is partially unrolled at the artist’s discretion, its visible part referencing the coiled whole—thus becoming a picture of language within language.

The original legal text from the year 1936 has been amended a number of times. It protects intellectual property that, as a historically evolved concept from the eighteenth century, presupposes the creative individuality of an author in their work. Authorship involves ownership and autonomy of the work, which are coupled, legally substantiated, and made basically controllable. However, today’s digital (re)production and distribution have allowed the authorship of originals to erode. Thus, the ground object is not simply reproducing a legal clause as a decorative, ornamental view. It is actually exposing, in the form of a figurative nexus of letter symbols, the problem of differentiating an original from the copy, taking as its basis the traditional legal text and shedding light on the now-questionable assumption of the autonomy of a work due to today’s production technology. The lettering maintains a sense of unavailability through the hardly legible, narrowly shifted, and spatially condensed rows. At the same time, the content of the law also openly unearths the reappropriation of art as intellectual property. Without saying a word about it, Aus dem Gesetz formulates—through mere constellation, like a dialectic image—a critique of the appropriation of creative products as intellectual property in the age of now fluent originality.
(Text by Dirck Möllmann, in: Isabella Kohlhuber – htb, selected works 2011–2017) 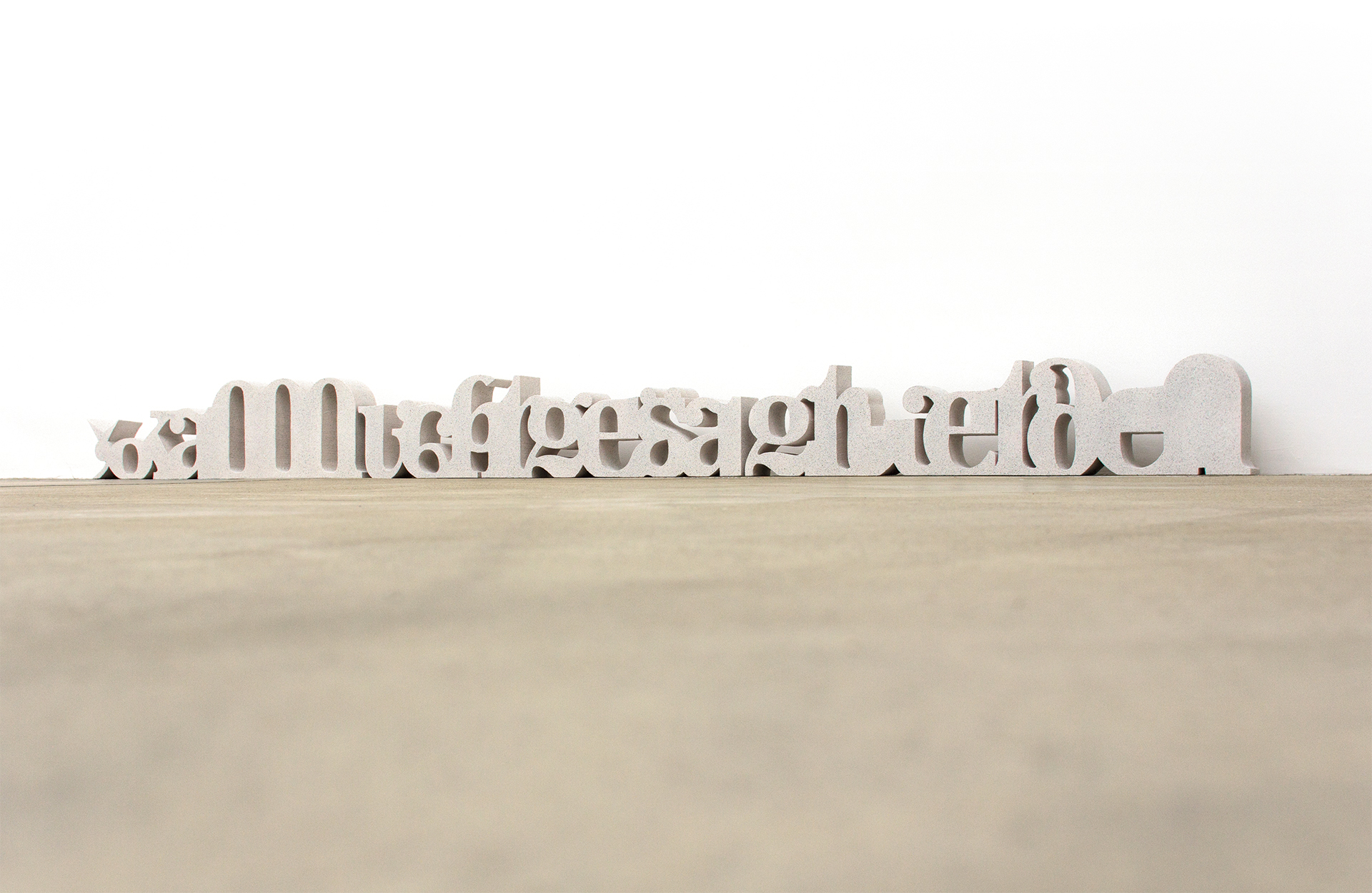 Was gezeigt werden kann / [What Can Be Shown]

This sculpture is a visual interpretation of Ludwig Wittgenstein’s sentence form TLP 4.1212 and a research into the threshold of image and text and the conditions of meaning.

The title of the piece is the first half of Ludwig Wittgenstein’s sentence TLP 4.1212. The sculpture itself visualizes the second part of his assertion. It consists of polystyrene and varnish, cut out in the letter-like shapes which were developed by the artist with the means of paper collage, then digitized and materialized again. These letter-like shapes named „Bastards“ are Kohlhuber’s personal media. In their origin, they are based on studies of Wittgenstein’s thoughts on „private language“, on his famous metaphor about the toolbox, on his position about what constitutes meaning („Die Bedeutung eines Wortes ist sein Gebrauch in der Sprache. “(Phil. Untersuchungen, §43)) and finally on the idea of the so called „Sprachspiel“.